Head of the Department of Surgical Diseases

The Head of the Department of Surgical Diseases is Doctor of Medicine, Professor Eugene D. Khvorostov, which is known in Ukraine and abroad as an expert in the field of surgery, minimally invasive endoscopic surgery, surgical gastroenterology, cryosurgery and Cryomedicine. 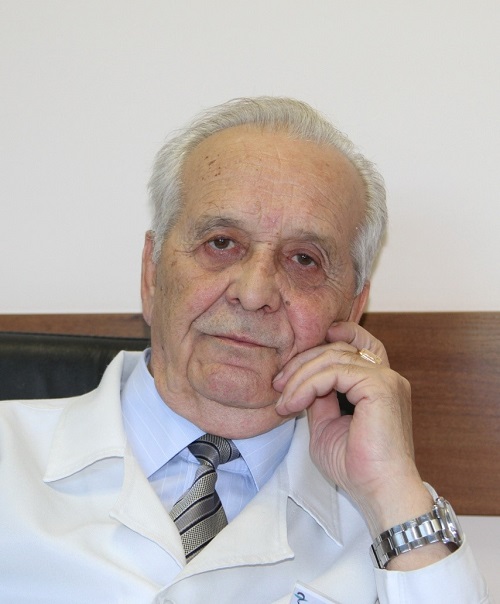 In 1962, he graduated from the School of Medicine of the Kharkiv Medical Institute in specialty "Medical case”. From 1962 to 1967 he was working as a surgeon at the beginning, and then as the Head of the surgical department of a hospital in the Komsomolets village, Kostanay Region. From 1967 to 1969, he was working as a surgeon in Clinical Hospital № 40 of the city of Kharkiv. In 1969, he was appointed as a postgraduate of the Department of General Surgery of the Kharkiv Medical Institute, from which he graduated in 1972 and enlisted in the position of surgeon of emergency room of the abdominal cavity of the Kharkiv Scientific and Research Institute of General and Emergency Surgery. In 1973, he defended his thesis "Functional state of sympathetic and adrenal system and protein metabolism during parenteral nutrition in patients with peptic ulcer disease due to resection of the stomach." In 1974, he was appointed as a chief surgeon of the medical and sanitary service of the Southern Railway. In 1989, he defended his doctoral thesis "The use of low temperatures in the selective proximal vagisection of patients with duodenal ulcer." Since 1994, he has been working as the Head of the Department of Surgical Diseases of the School of Medicine of V. N. Karazin Kharkiv National University. In 2005, he was awarded the title of "Honorary Doctor of Ukraine."

Under the guidance of Professor E. D. Khvorostov members of the Department of Surgical Diseases develop and implement into clinical practice new methods of diagnosis and treatment using advanced minimally invasive technologies. For example, next surgical operations have been implemented using laparoscopic and endoscopic techniques: laparoscopic cholecystectomy, vagotomy and splenectomy, laparoscopic xenotransplantation of the culture of cryopreservation of islet cells of the pancreas in diabetes, endoscopic papilosfinkterotomy with litotraction, endoscopic surgery at esophageal achalasia, the use of low temperatures in the surgical treatment of duodenal ulcer and cholelithiasis, puncture treatment of liquid formations of the abdominal cavity under the control of the ultrasonography and videolaparoskopy, the use of ultrasonic scalpel in abdominal surgery.

Head's report on the work of the department (2020)